Home » A guide to our glorious garden 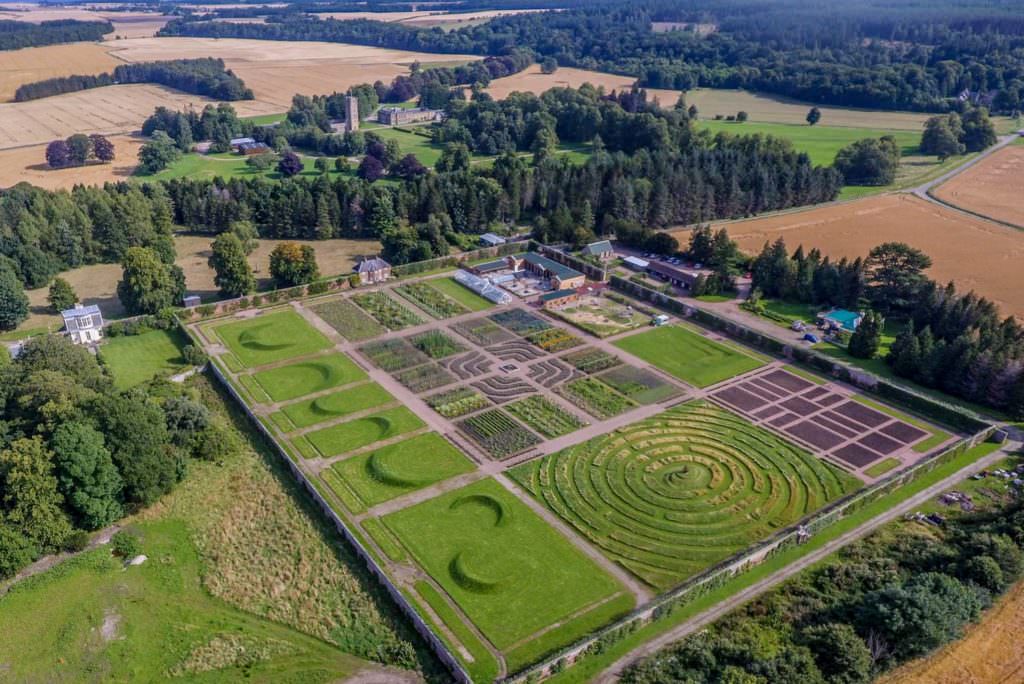 A guide to our glorious garden

Situated on the site of the former village of Bog-of-Gight, the 8-acre walled garden at Gordon Castle was constructed between 1802 – 1803 with the original site being much near to the castle. This was a fully productive garden for many decades but gradually declined in the early 20th c. as did most walled gardens of the age. The site was used as a market garden and later to grow raspberries to supply Baxter’s. The garden was then derelict for a number of years, being an empty field.

In 2012 the garden was completely re-designed by the Chelsea Flower Show award winning designer, Arnie Maynard. The brief of this contempory plan was to make everything in the garden productive as well as aesthetically pleasing, whilst simultaneously adding elements such as a Maze, a Play Area and Performance area. When complete in 2018 this will be one of the largest productive walled gardens in the UK.

The produce is grown for a variety of reasons, including use in the Café, to sell via our on-site shop as well as to supply our huge range of products which are sold on-line and in the shop.

The espalier trained fruit trees which you will see clothing the garden walls were mainly planted in the 1950’s/60’s, however some specimens, including the Gordon Castle plum are much older. Two fine specimens of this variety can be found in the far North-West corner of the garden, they produce a large golden sweet fruit. The walled trees, which include peaches, apricots, figs, apples, pears, plums and gages number nearly 260. To add to our collection, we are in the course of planting 750 apple ‘step over’ trees around the garden perimeter, these will include all of the Scottish apple varieties, numbering nearly fifty.

The main productive centre of the garden was completed in 2015 and includes four large corner vegetable beds which we operate on a rotation system to avoid pest and disease build up, also four colour themed flower beds. In addition, there are salad beds, asparagus, artichokes as well as the 3,000 Lavender plants at the heart of the garden. There are two varieties, L. angustifolia ‘Hidcote’ and ‘Alba’ which produce a fine summer display and allow us to harvest a certain amount for oil extraction which we use in many of our products.

The ‘Pear Arches’ along the path surrounding this area were constructed in winter 2015/16 and include eight tunnels and a total of eighty-eight trees. There is a different variety of pear for each tunnel and it will take over ten years for the trees to mature and cover the arches.

Recently planted are the Herb Gardens with 4,000 perennial plants, including staggered rows of Rosemary ‘Mrs. Jessop’ which will eventually be trimmed to form stunning ‘cloud hedging’. Many varieties of annual herbs will be planted in spring 2017 and the area will mature during the summer. Apart from the Rosemary, the herbs have been planted very informally in small groups and will produce an interesting and beautiful display.

Recently planted are the eleven different varieties of Quince which will gradually mature over the years to form a gentle canopy. The process of under planting has now begun and will continue into 2017, there will be four varieties of Viola and four varieties of Alpine Strawberry. Eventually the plants will completely cover the ground.

Work begun on the Soft Fruit Garden during Summer 2016 including initial ground preparation work and brick edging which will form the paths. The beds will be cultivated this autumn and winter, ready for planting with a whole array of fruits in early spring, the area will then have visitor access.

The final stages of the renovation are the ‘themed gardens’ located on the western side of the garden, we aim to start work on the first of these gardens this winter/spring. The gardens will have different themes such as a Nectar Garden, a Perfume Garden and Medicinal gardens. The curved mounds which you can see were specially landscaped after the garden was re-designed.

The maze started life in 2015 with a meadow theme, this has been used as an experiment to gage the reaction of our visitors. If we keep the maze as meadow permanently then the long grass strips will be planted with wild flowers and bulbs. It will be simple to start with a fresh theme in the future if something different was required.

This is an original Victorian, Mackenzie & Moncur glasshouse which has been lovingly restored over the course of the last few years. This is the remaining glasshouse of an extensive range which would have stood where the Café now stands, in addition there were numerous cold frames. The glasshouse is now in full use and houses many varieties of tomato, cucumber and chilli plants, amongst others. These are harvested through the season for use in the Café and selling in the shop.

AS THE COVID LOCKDOWN EASES, WE CAN:

Open our Café 11.00am to 4.00pm, Thursday to Monday. We currently only offer a takeaway service, but from 6th July we are able to offer outdoor seating, and from the 16th, limited indoor seating as well.

Allow you to walk around the garden in a socially distanced manner. Continue to sell plants, produce and flowers from the garden. The play area is open.

Operate the shop within the Cafe while observing social distancing.

Open up the river. The river has been open for locals and from the 3rd July will be open for all comers.

Open up our holiday cottages. We are taking bookings from the 3rd of July.

We are hoping to have a season of outdoor films in the Castle Garden later in the summer.