We have lots of exciting things planned for 2018 but none more than to kick start with a new Head Gardener, Ed Bollom. Our previous head gardener John Hawley left us in November for a new life south of the border with his family.

Ed isn’t new to our Scottish oasis, he has been a senior gardener here for several years and has been working hard on our garden project. You may recognise him from some of our YouTube garden tutorials! He is also the man behind many of our amazing photographs.

So, to introduce Ed properly to his new role, here is his first blog post! 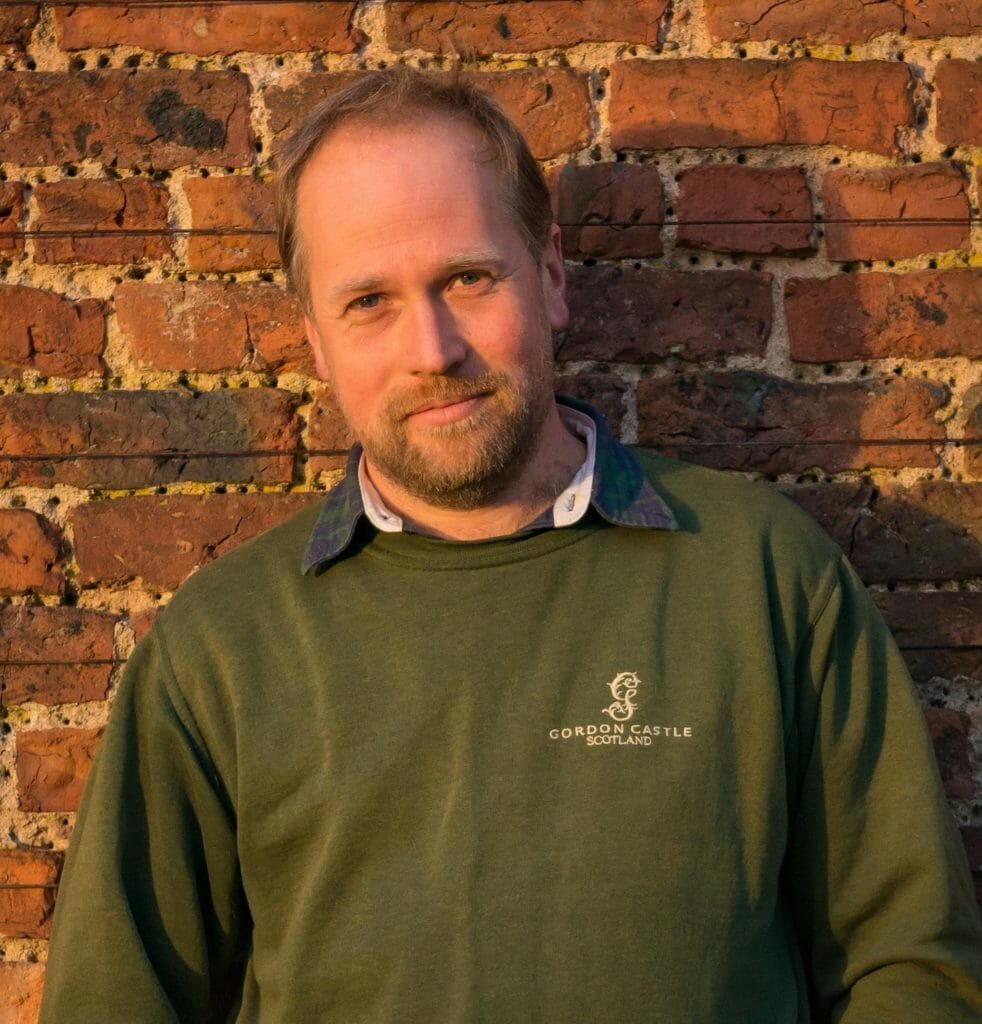 For my first garden blog post I thought I’d explain how my horticultural career brought me to Gordon Castle.

I’ve been gardening for almost 15 years now and Gordon Castle is the seventh garden I’ve worked in. My career has taken me all over the country working in historic and botanic gardens, from Osborne House on the Isle of Wight to Chatsworth House in Derbyshire. I started my journey studying sustainable horticulture at Cannington college in Somerset, motivated by a love for working outdoors and went on to work in several gardens as part of an apprenticeship scheme run by the Professional Gardener’s Guild.

My real passion has always been for productive gardening; particularly growing fruit and vegetables. As a student I always dreamed of working in a traditional kitchen garden growing plants that would actually be used rather than simply admired!

I learnt the craft of productive gardening as the gardener in charge of the organic walled garden, nursery and orchard for the Prince of Wales at Highgrove House in Gloucestershire.  I spent five fantastic years growing all the fruit, vegetables, cut flowers and herbs for the Prince and his guests. During that time I married my lovely wife Anna and we had our first child Freddie. 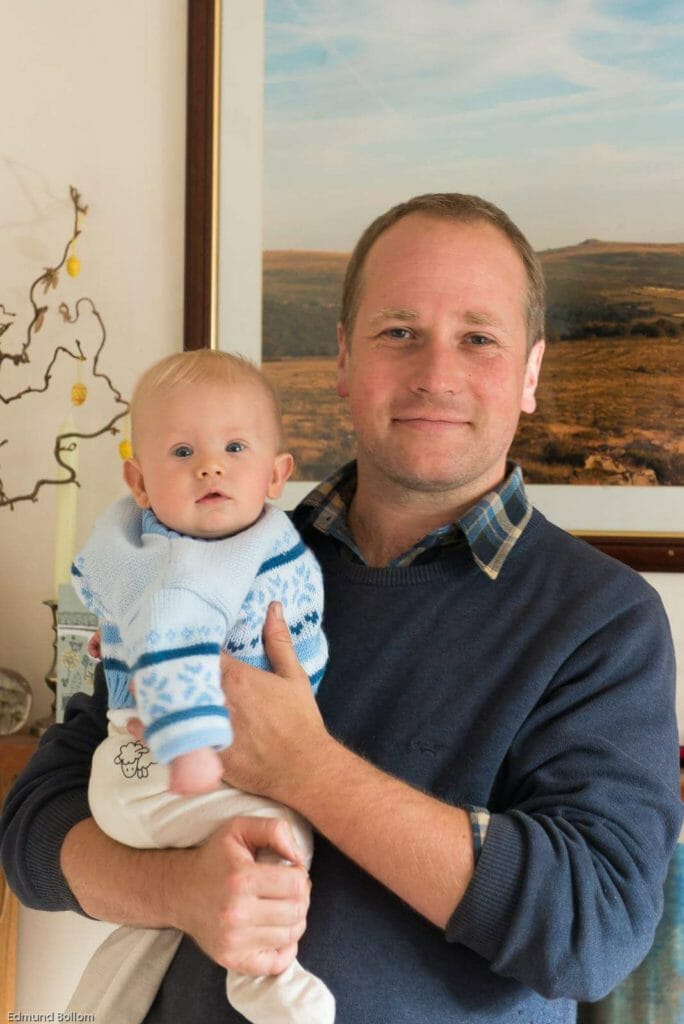 I first heard about the Walled Garden at Gordon Castle from my father in law, Simon McPhun, who was helping out in the early stages of the project. When Simon first showed me Arnie Maynard’s plans for the garden I thought it was far too ambitious; the kitchen garden at Highgrove was 1 acre and took all of my energy with the help of 2 other gardeners to keep it to a decent standard and here was a project to renovate a walled garden almost eight times the size!

Anna and I were happy in Gloucestershire and very busy as new parents, so we put any ideas of moving out of our minds. But I couldn’t help thinking about the walled garden project and decided that maybe we should just go and have a look at the site. When we got up to Fochabers and looked around the garden (it looked more like a building site at the time) I started to see the potential and that whilst the plans were ambitious Angus and Zara were going to make it work. It is such an unusual project I felt it was too good an opportunity to miss.

Anna, Freddie and I made the move from Gloucestershire to Moray just as we discovered that Anna was pregnant with our daughter Amelie and I started work as deputy head gardener in May 2015.

I’ve thoroughly enjoyed watching the garden develop for the last couple of years, the garden team are fantastic and make it a friendly and productive place to work. I don’t think there is anywhere else in the country doing what we are doing on such a grand scale. Coming into my third season I feel I’m really starting to get to know the garden and hopefully can hit the ground running as Head Gardener.

I love the idea of taking this wonderful historic space and turning it into a functioning productive Garden growing the highest quality produce. Traditionally walled gardens were used to feed the great houses of our country, I like to think of the Walled Garden Project as a modern take on a very old theme. So please keep on following us on our journey, there’s plenty more to come!

John, our Head Garder, is leaving us today as he and his family explore a new life south of the border. John has been integral in the development of the garden to date and we wish them all the best in their new, exciting adventure. 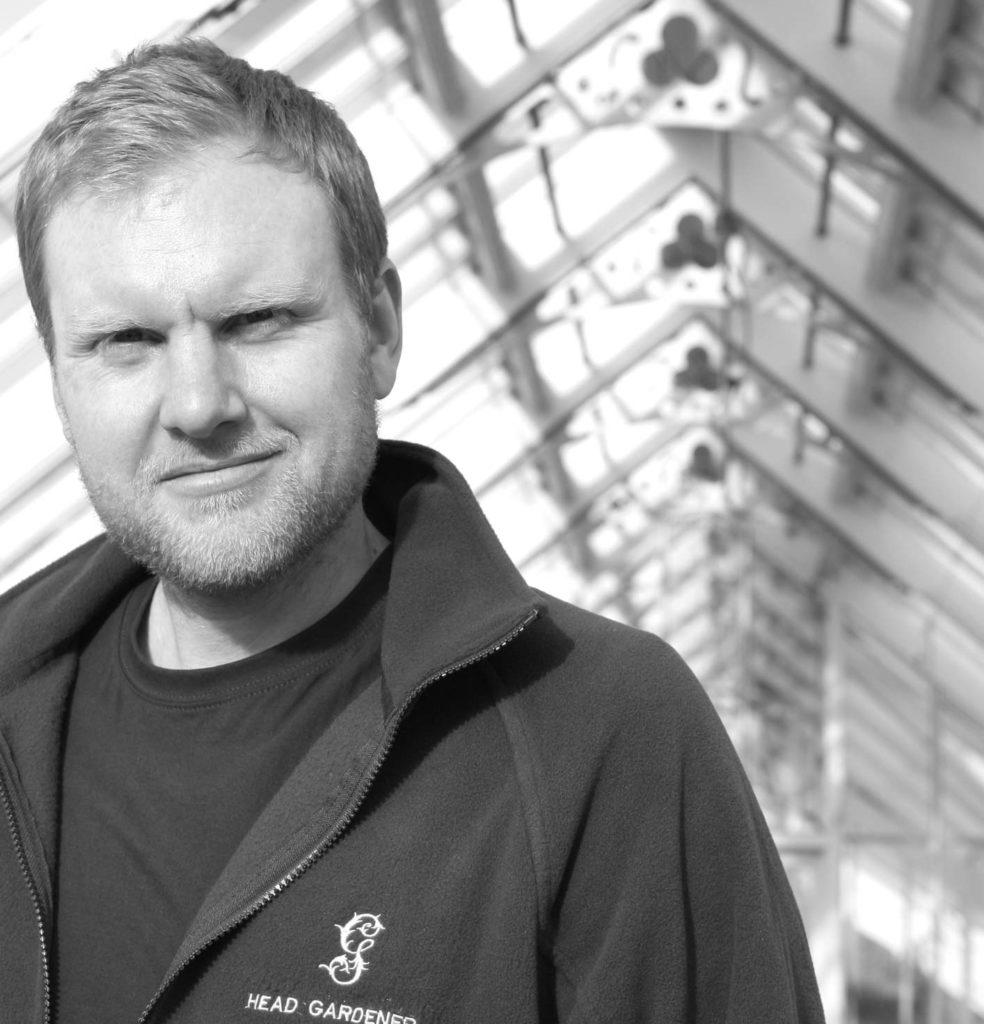 To see us out in the proper fashion, John has written one final blog.

John here to update you on our November activity in the garden. We recently joined the World Wide Opportunities on Organic Farms UK (WWOOF) which is an international volunteering scheme for people who would like to gain experience on farms, gardens and smallholdings. The idea is that people work with us in the garden in exchange for accommodation and food. We had our first WWOOFer’s recently who came from USA to work in the garden and sample life in Scotland. The five ladies worked extremely hard and we really appreciated their enthusiasm and were sad to see them leave. We have two more WWOOFer’s joining us for three weeks in December and I’m sure there will be many more over the coming year. 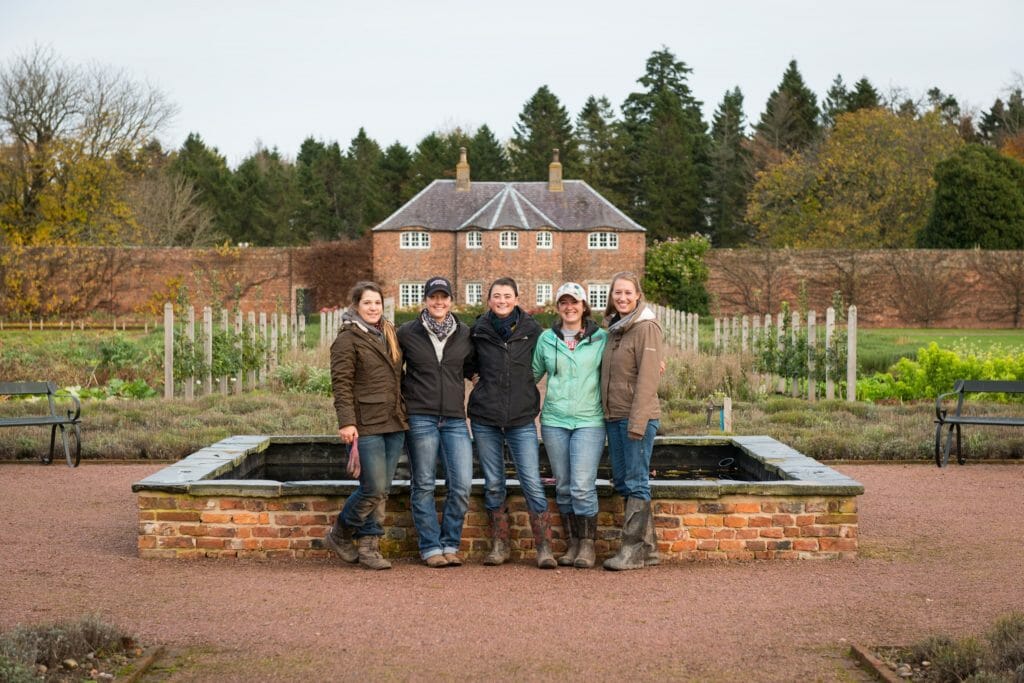 We are in the process of re-designing the four cut flower beds which I’m sure will be an interesting project. The colour themes will be the same but many new varieties of plants will be introduced including more perennials than we have grown in the past. This will help increase the early season interest and range of flowers and will include plants such as roses and peonies. The beds will be intersected by broad paths which will provide easy access and allow us to work on the growing spaces without having to stand on them too often. Please do watch out for the progress we make as I’m sure they will look fantastic. 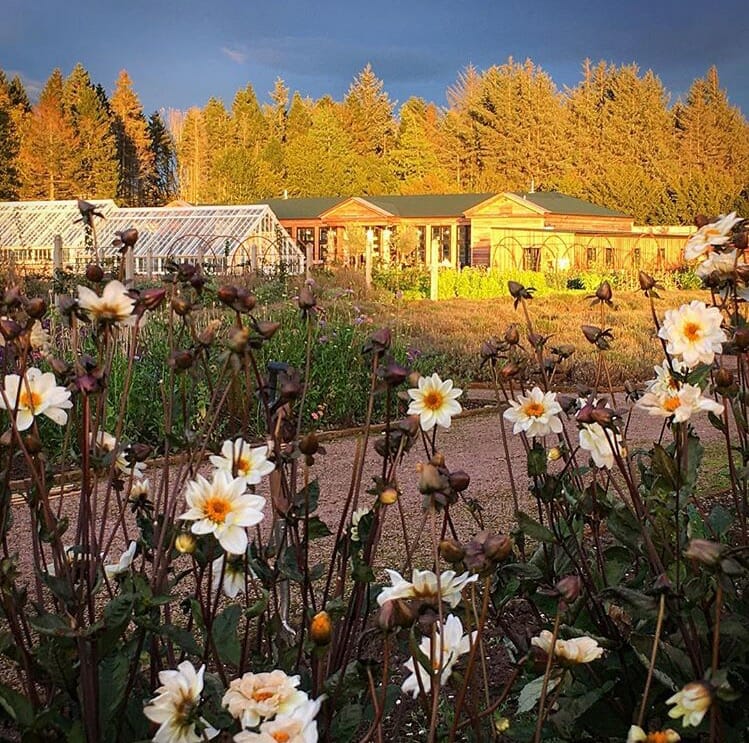 Work has also begun towards introducing the next section of apple step overs, which will be planted around the Soft Fruit Garden. Before the trees are planted later in the winter, the support structures have to be erected as well as the metal edging around each row. There will be over sixty Scottish variety apple trees to plant this winter out of a total of four hundred and fifty all of which will be planted around the perimeter of the garden. 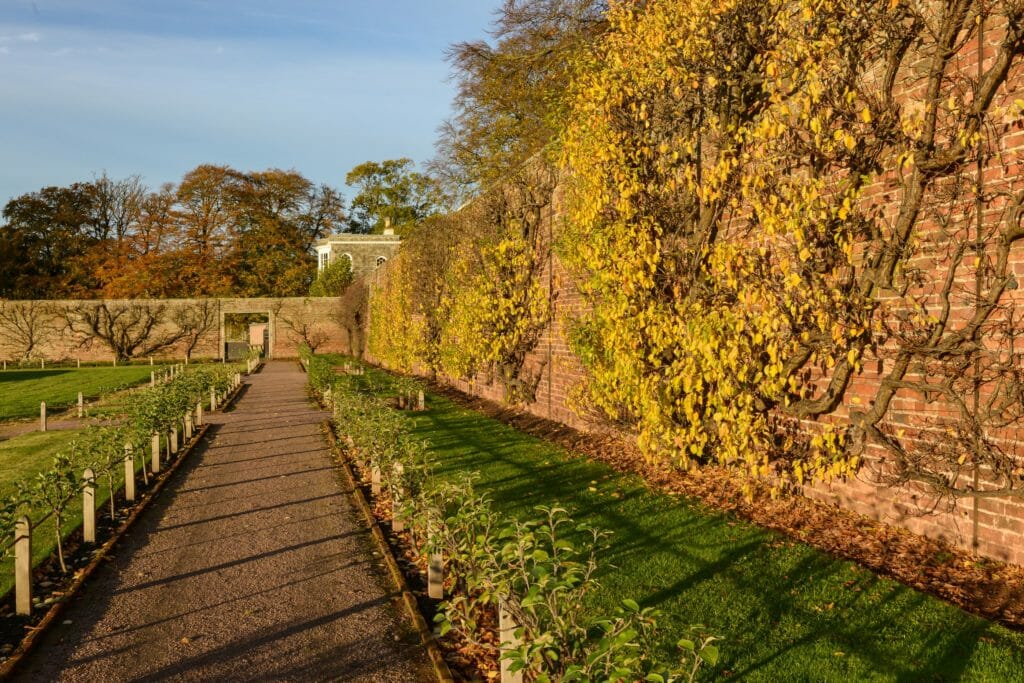 As with previous years we are planting thousands of spring flowering bulbs which include daffodils, tulips and anemones. It’s a very satisfying task as we know how fabulous they will look in just a few short months.

The weather conditions this year have meant that we have been able to grown some supersized vegetables, especially the brassicas which have enjoyed all the rain in the summer months. Mark is pictured below proudly displaying said vegetables! 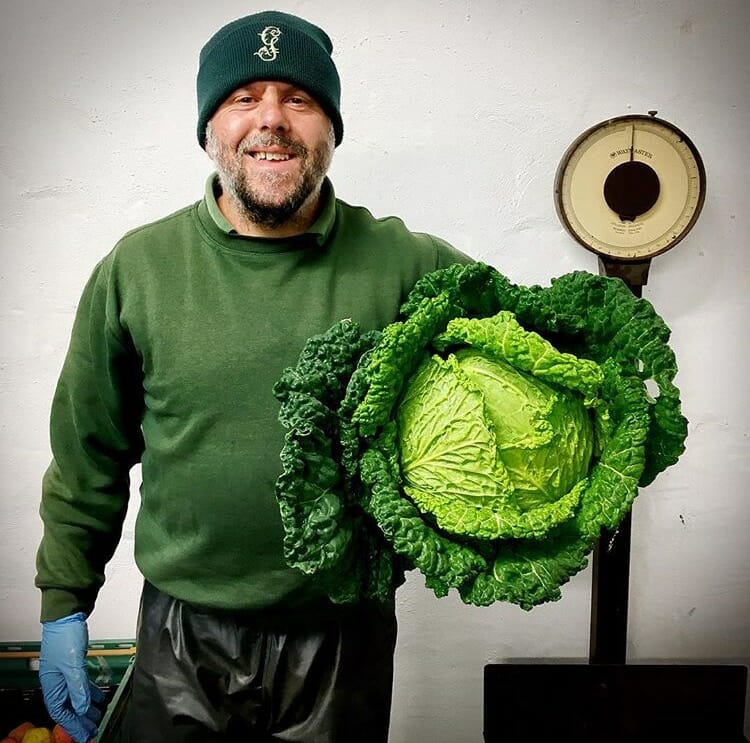 And to finish off my final post, a little touch of winter wonderland for you all. Hope to see you soon Scotland!

Best of luck John,  from everyone at Gordon Castle Walled Garden.